Samsung and TikTok team up for StemDrop music collaboration tool

Samsung and TikTok have teamed up to announce StemDrop – a new format for recording and mixing music on TikTok. Simon Cowell is the creative director behind the venture, and Syco Entertainment and Universal Music Group are also on board. Stems are the building blocks of a music track divided into elements like vocals, drums and bass, and TikTok is adding a StemDrop Mixer to help anyone mix and master songs to their liking. 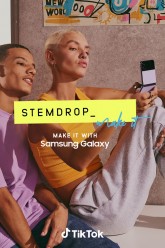 TikTok’s new StepDrop feature will highlight rising user-generated tracks on a weekly basis in an effort to help up-and-coming musicians reach a wider audience. Music artists Max Martin, Savan Kotecha and Ali Payami have collaborated on a new song which will be shared exclusively on TikTok as StemDrop. Once the track is live, users will be able to remix the track and upload their own covers. TikTok StemDrop launches on October 26.